Many hotels in Munich are located in the district Ludwigsvorstadt near the central railway station. It’s 15 minutes walking to Marienplatz and Theresienwiese (Oktoberfest). One of the most popular properties is Eden Hotel Wolff. This accommodation is next to Hauptbahnhof. The rooms are very clean and have good prices. Hotel faciltities include a spa and rooftop terrace. More than 2755 reviews (8.5) The 4-star Intercity Hotel is standing besides the entrance of Hauptbahnhof. More than 2495 reviews (7.7). Three star Condor Hotel has discount prices. To the train station is 200 metres. More than 2890 reviews (7.8). Hotel Marc München is close to central station with more than 2300 fabulous reviews (8.9). 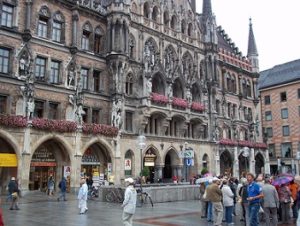 Hotels in the Old Town (Altstadt)

Platzl Hotel is a very popular property in the Old Town and is just a 2 minutes walk from Marienplatz. There is a direct metro train to Central Station and Munich Airport. Platz Hotel has more than 3230 superb reviews(9.0). Three star Mercure Hotel München Altstadt is in the city center close to Marienplatz. Free wifi and a large breakfast is included. More than 1950 reviews (8.5). A discount property in the middle of Old Town is 3-star Hotel Falkenturm.

The main attractions in Munich

Munich Franz Josef Strauss Airport is located 29km of Munich. It is the second busiest airport in Germany after Frankfurt. The airport S-Bahn rail link S1 connects the airport with the city centre (45 minutes).

The Central Station (Hauptbahnhof) is located downtown with 350.000 passengers a day. It’s a terminal train station with numerous train services to other cities in Germany as neighbouring countries. Passengers can buy tickets from ticket vending machines with a debitcard. A creditcard or cash is not required.