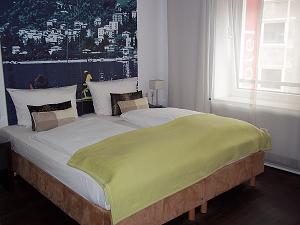 On this page you will find a selection of cheap hotels + good reviews. Most cheap properties are located in the district near the Central Station (Hauptbahnhof) or in de suburbs.

Letomotel Moosach is cheap hotel with more than 5090 very good reviews (8.4). The location of the property is in Munich North (Moosach) opposite the metro station. Every 10 minutes there is a train to the city center and airport. It takes 19 minutes with the U3 from Letomotel to Marienplatz.

Jaeger´s Munich is steps from Munich’s Central Station. In the neighborhood of the station are lots of restaurants, cafe’s and bars. Jaeger’s has mixed dormitories and single-, double-, twin- and quadruple rooms with private bathroom. To Marienplatz is 15 minutes walk. More than 3735 reviews (7.3).

Hotel Herzog Wilhelm is located in the Old Town at 600 metres from Marienplatz. To Central Station is 15 minutes walking and to the Oktoberfest grounds is a 20 minutes walk. Single-, Double-, Twin-, Triple rooms and apartments. More than 3595 reviews (7.1).