Marienplatz is a large square in downtown Munich. It’s the heart of the old city. The main building on the square is the New Town Hall with its tower of 85 metres. It was built between 1867 – 1908. The New Town Hall host the city government and it’s administration. On the ground floor is a main tourist information office. There is also a department store, fashion shops, Vodafone, Swatch and a large terrace. 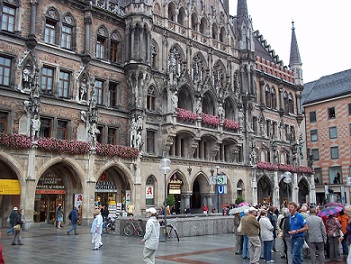 The Old Town Hall is on the eastern side of Marienplatz. The building was constructed in the 13th century but it had several reconstructions in the past. The Old Town Hall was destroyed in World War II and rebuild in the old style. Nowadays the city council of Munich is housed in the Old Town Hall.

An U-bahn (metro) and S-bahn (Stadtschnellbahn/suburban train) station is on the corner of the square. Several S-bahn lines connect Hauptbahnhof (Central Station) to Marienplatz: S1, S2, S3, S4 and S8. Distance to the railway station is 15-20 minutes walking.